I’d like to sum up the first couple days of our trip to Europe, which were spent in Rome and the Vatican. I will also throw in a few pictures, emphasis on “few.” Don’t worry; I’m not making you sit through a slideshow of all 610 of my pictures. Wow, 610… did I even see anything with my own eyes?

On our first day, we saw the Trevi Fountain, which was packed full of people. 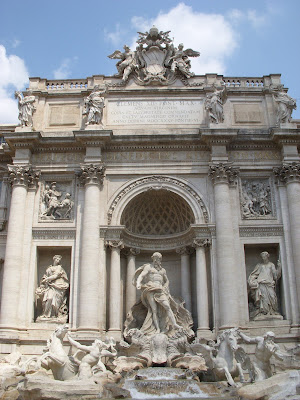 This first day of Rome, I did not feel good. I had heartburn from breakfast (which I determined was from the eggs), which started during a mass I sat through with my family. It was my wife’s first Catholic service, and I think she was disappointed nothing interesting happened, not to mention that the priest was more liberal than Barack Obama. She enjoyed the post-church donut/pastry (some things truly are universally practiced by Catholics).

By mid-day, my stomach acid had worked its way through all the tubes. I was beginning to feel really ill and in need of a bathroom by the time we got to the Coliseum. I ran up the stairs of the hotel to our room when we got back… only to realize my wife had the keys. But no worries, I made it in time.

So besides experiencing what my wife referred to as “Caesar’s revenge,” the first day of touring was very interesting and relaxed. Also, this was the first of many days in Rome where meals were skipped (this time, lunch). However, we ate a wonderful dinner out where we got great Italian food, or as they call it in Rome, “food.” 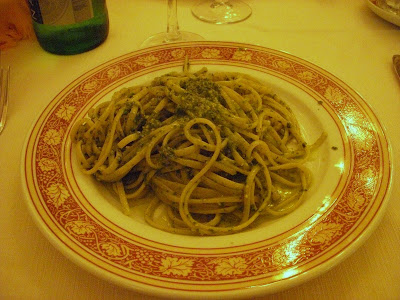 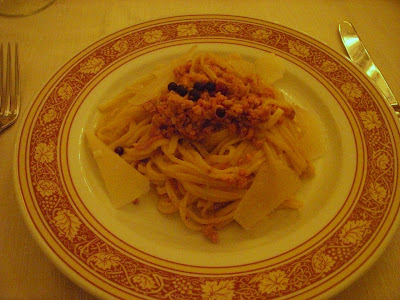 My wife and I both got fettuccini, mine with pesto and hers with veal (the black balls are kapers). As per our arrangement upon ordering, we switched plates half-way through each of our meals. They were both amazing, but I must say I preferred the veal.

We wandered around a little, going back to spots me and my wife wanted to see again. We went back to the Column of Marcus Aurelius, the Spanish Steps, and our last stop was to see the Trevi Fountain at night because we were told it lit up. My wife seemed disappointed; I think she was expecting some sort of Pink Floyd laser light show complete with disco ball. However, we saw this neat fountain on our way back: 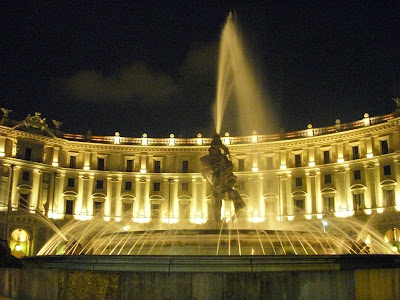 First up for day two is Michelangelo’s Moses statue, located in the Basilica of St. Peter in Chains: 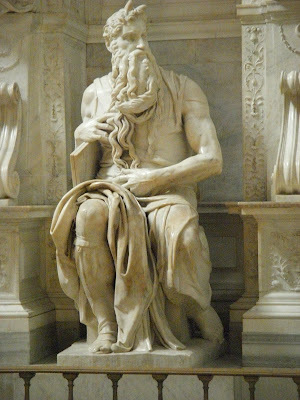 We saw this on our second day, before going to the Vatican. Those horns used to be much longer, and were rays of light (Exodus 34:29). The story goes that they were once long and were broken off and filed down over time. However, the Hebrew word for rays of light and horns are spelled the same, so it could simply have been a translation error (as it is translated into most versions of the Bible as "horns") which was taken literally. This isn’t even the only well known horned Moses in Rome: 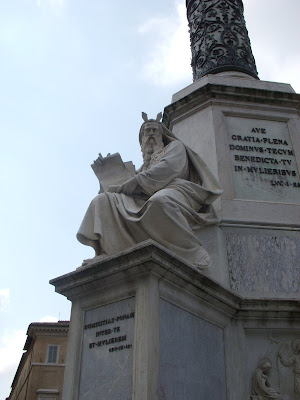 This was near the Spanish Steps, next to a depiction of Ezra and a towering column topped by Mary.

On the second day we also saw the Pantheon. Being a learned man of all things Classical and snooty, I was able to clarify to my wife several times in a condescending tone that it was the Pantheon, not the Parthenon (though we did see both on this trip; the Parthenon is at the Acropolis in Athens, Greece). The Pantheon was interesting, and housed the remains of the artist Raphael: 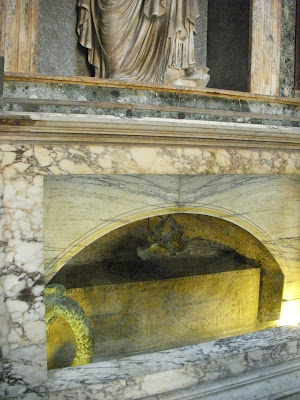 Rather than post a picture of the Pantheon in all its glory, I decided to show a picture I took of its one imperfection, the spot where the portico (entry) meets the domed rotunda: 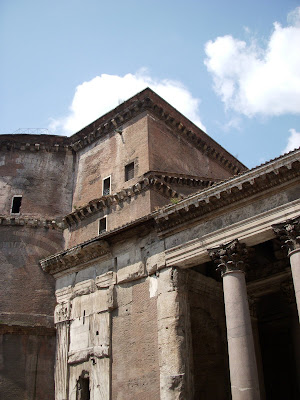 Initially, the columns of the portico were to be higher. One can see in the picture where it was meant to meet the rotunda.

We then headed off to the Vatican, with our ultimate stops being the Sistine Chapel and St. Peter’s Basilica. I’ll say it now: I have pictures of neither because my camera’s battery ran out in the stairwell leading into the Sistine Chapel.

First up is a painting that I find quite interesting. Sadly, I have little info on it because the title is obscured at the bottom. I know it is located in the Pinocoteca museum. I have no idea who the scratched out figure could be, but I love a nice, overt display of censorship: 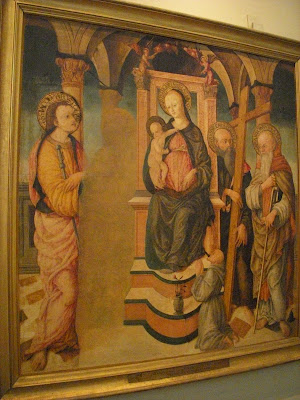 Next we have a statue of a woman with over a dozen breasts: 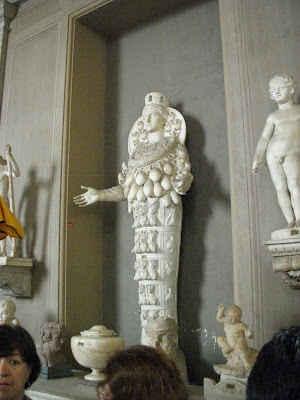 Here, you can see not only the immensity of the map room and its detailed ceiling, but also the crowd we braved: 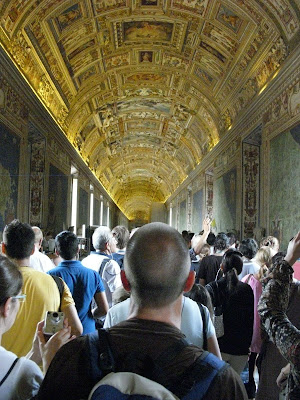 At this point my camera needed to be recharged. That night, I took some photos from the roof of our hotel. Here’s one of the better ones: 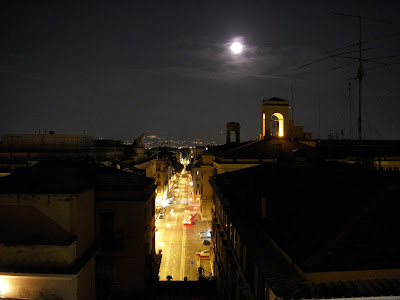 For my next blog post, I’ll be posting about our trip to Pompeii and the boarding of the cruise.

However, in honor of John Bolton’s appearance on the Daily Show last night, I just had to post this timely photo of him, taken in front of the Parthenon in Athens: 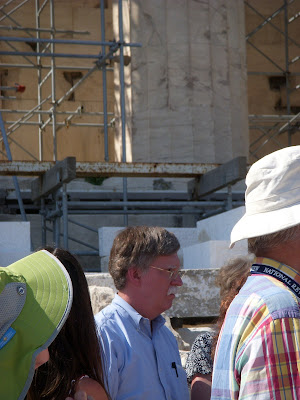 I am the walrus, coo-coo-cachoo.