Recap of Pompeii and Boarding the Cruise

First, I apologize for the gaps in posting. I have been working on writing many other things, looking for a job, and dealing with a car accident. Second, I think I figured out all the problems associated with posting pictures, so I should be getting them up much faster now. You can now click any posted pic to enlarge them.
Our third day in Rome was the first day away from my parents. I wasn’t itching to ditch them, but one always acts and feels differently around parents. They opted out of going to Pompeii because of the arduous nature of the trip.
It was indeed a tough trek. First, we took a splendid bus ride to the south of Italy, where we initially stopped in Naples (or Napoli). Here are some pictures of downtown and the coastal residential areas: 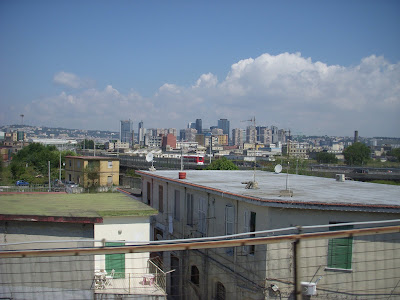 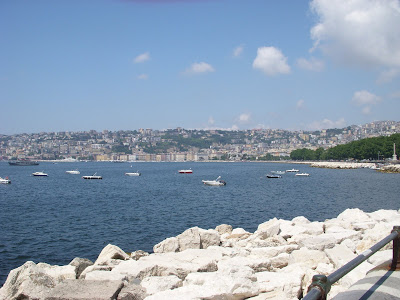 When we got to Pompeii, we had a lovely meal of salad, bread, and pasta with red sauce. I had a four euro Pepsi (that’s about seven American dollars). I will say this: soda tastes better in Europe because they use sugar rather than high fructose corn syrup, but it is expensive as hell. I kept some of the cans (all in foreign languages) as souvenirs. Why not when you’re paying that much for a drink?
When we got to Pompeii, I swear we entered at the lowest point in the entire town because the rest of the walk was uphill, the whole way. We saw shops and a gladiator training facility. We walked through an “audium,” which looks like a small auditorium for theatre but was used by politicians to give speeches.
The truly amazing part was when we got to the residential part and began to see the elaborate wall frescos. For example, here is one of a hunting scene: 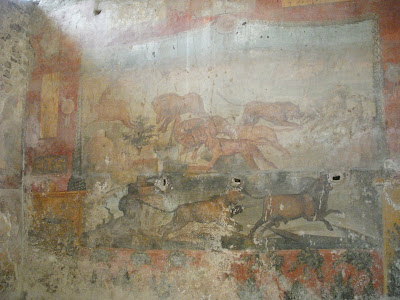 In these, one can see some of the visual influences for the later Christian angels: 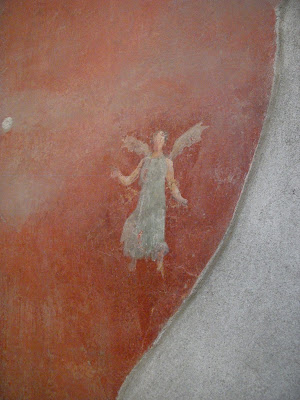 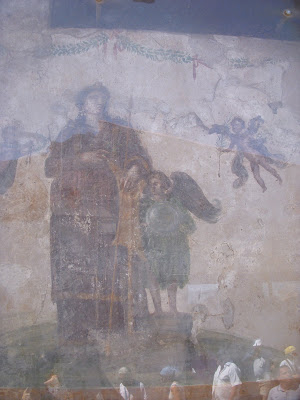 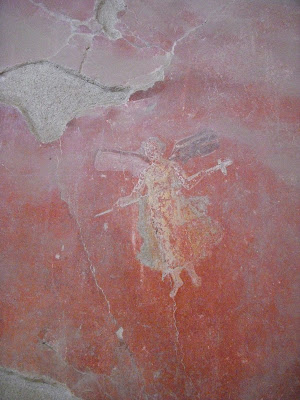 These next two are some of my favorites. They are both mythical beasts of some kind, the first my wife called a “bird-snake,” the second is likely a griffon or sphinx. 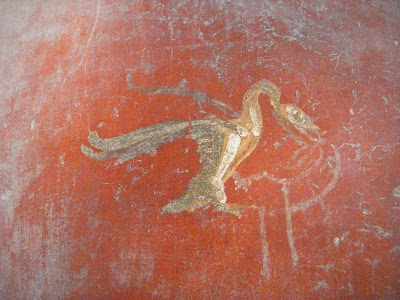 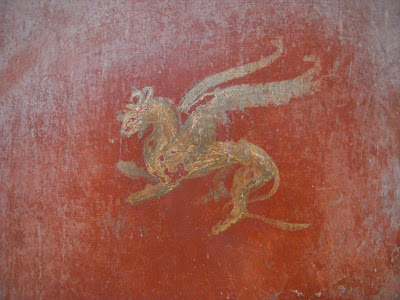 This next series I didn’t want to leave out a single one. They are frescos that adorned the walls of a brothel. They depict couples in varying positions, and in one a lonely yet well endowed man. 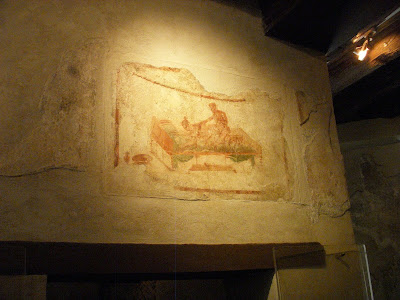 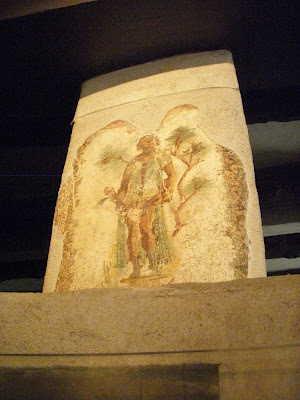 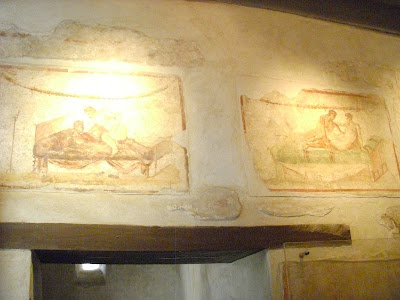 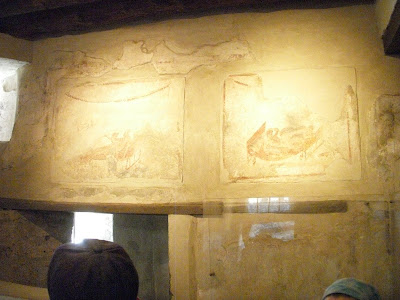 The next two pictures are some of the more commonly seen images from Pompeii. They are plaster casts of victims of the volcanic event, made by filling the empty spaces found by archaeologists in the hardened ash and pumice. The flesh was long gone, but the bones remained: 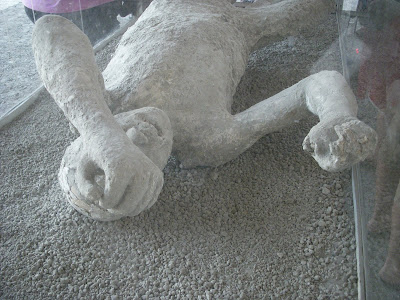 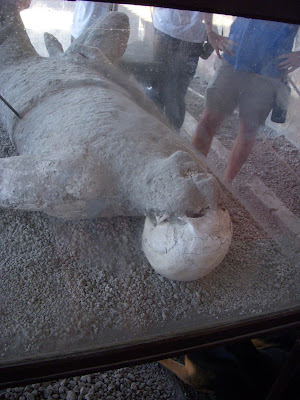 For those unfamiliar with Pompeii, it was buried by a volcanic eruption in 79 CE. As Christianity wiped Europe clean of any polytheistic culture over the centuries, Pompeii lay untouched under the ground. Because of this, some of the most unique finds from this lost time come from Pompeii and its neighboring city that suffered the same fate, Herculaneum. It is one of the only places in all of Europe where Roman frescos depicting polytheistic deities were preserved on such a large scale.
Of course, one of the things that had to go from Christian Europe were the baths. We walked through one, and it was quite elaborate. They had chilled water which was stored below the frost line to maintain a cold temperature. They had hot water baths that were fuelled by underground, man-powered boilers. The walls were ornate and covered in images of Neptune and Atlas (as you can see below, many figures of him are holding up the roof of one of the rooms). 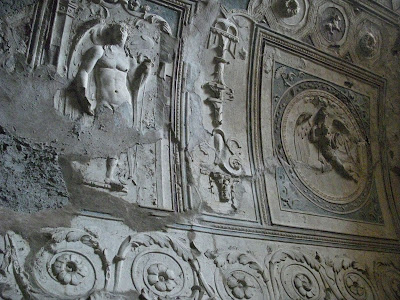 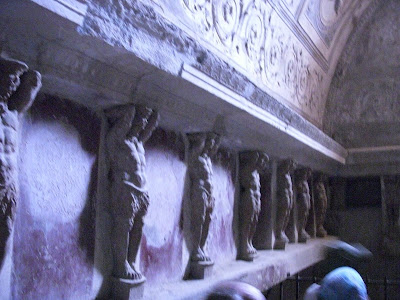 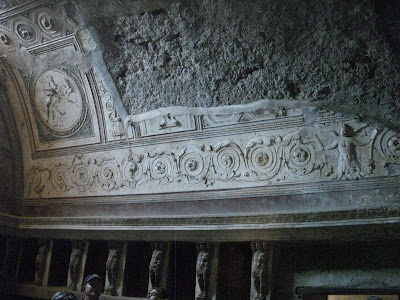 What amazes me is that Christians think they enlightened Europe with their presence, but it took them over a thousand years to re-attain the technology of running water. As a result, their hygiene was atrocious, and they were hit with plague after crippled plague.
Anyhow, here’s three more pictures of casts of victims. The first is a woman who is pregnant, evidenced by the bulging stomach. The second is a man with his hands up to his face, probably trying to ward off the stifling fumes. The third is a dog. 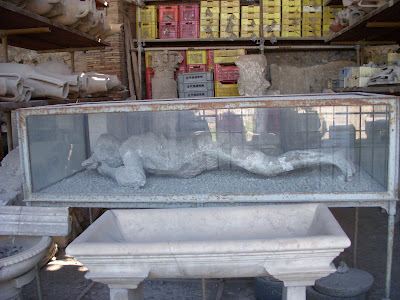 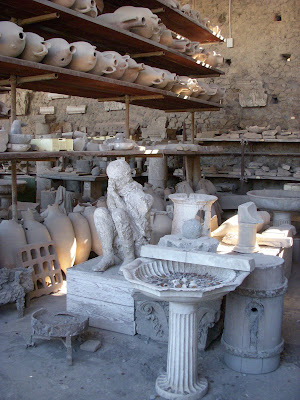 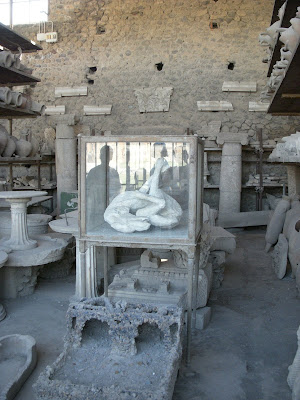 There were several live dogs at Pompeii, also: 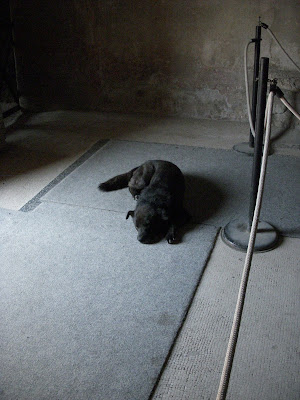 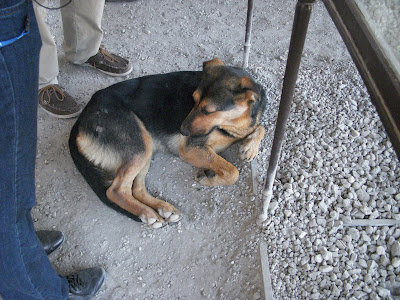 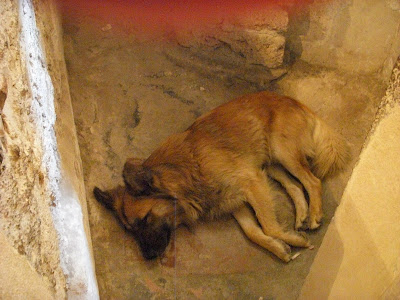 Finally, at the entrance of one of the homes was this picture of a dog. 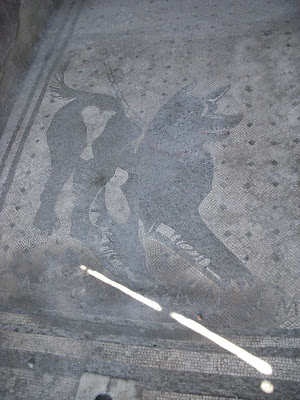 Written in Latin is the warning “cave canem,” or “beware of dog.” We actually bought a magnet version of this tiled floor depiction.
That night, we got lost on our way back because the tour bus dropped everyone off at their hotel… except apparently us. They dropped us off at an unfamiliar corner and told us it was a few blocks down “that way.” We went “that way,” and saw nothing familiar. We pulled out our trusty map and couldn’t find any of the street names on the map. We ended up just walking up to someone, saying the street and hotel name with a question inflection, and following their directions. It got us close enough that we easily found our way back.
The next morning, we were whisked off to the cruise ship in Civitavecchia. I got some reading done on the hour and a half ride. I read most of “The Cosmic Connection,” by Carl Sagan and a book on Greek history over the course of the trip.
We got through security quickly because my father was on oxygen due to his lung and brain cancer. We saw our parents off to their room and then went to our own. We had a nice dinner, and then returned to our room to watch the sunset from our balcony. 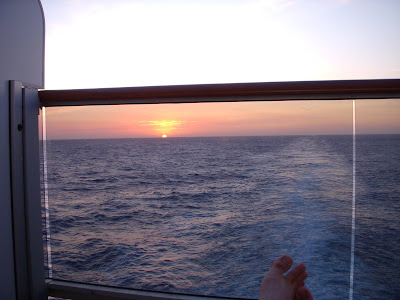 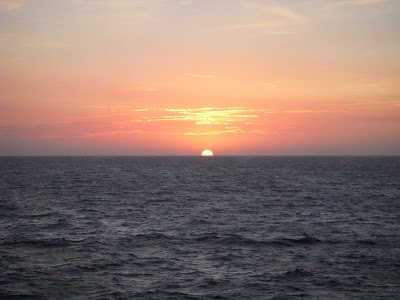