The move down south from Philadelphia has gone quite smoothly. My cat pooped in her carrier about an hour into our eight hour drive, but otherwise the ride down was uneventful.

I made a massive MP3 CD with over eight hours of music for the ride down (my wife owns an iPod, but I refuse to buy anything made by Apple after having to use a Macintosh computer for the first 13 years of my life; you cannot convince me that company is anything but a fetid pile of putrid filth). Most of the music was travel, home, or southern themed. Perhaps I’ll post the playlist at some point

The best part of moving to the south for me is being in range of Steak ’n Shake, which is a chain of diners that hasn’t made it to the Mid-Atlantic/New England Coast. The “steakburgers” they serve are rather lackluster, but their chili is some of the best I’ve ever had. It’s the kind of chili that is the consistency of mud, which is what I became accustomed to growing up in Michigan eating Coney dogs. The milkshakes and malts aren’t bad, either, and they use actual cherry and vanilla syrup to make cherry and vanilla Cokes.

However, Steak ’n Shake isn’t really southern, it’s primarily Midwestern and started in Illinois. The first really southern thing I tried was a soda called Cheerwine. I consider myself somewhat of a soda connoisseur. I’ve tried several, from Dr. Brown’s Cel-Ray (celery flavored) to my personal favorite, Vernors (which is a vanilla flavored, 3 year barrel-aged ginger soda, and also happens to be the oldest American carbonated soft drink).

Cheerwine is interesting. It’s a dry cherry soda, with a twist: it’s caffeinated. While it’s not energy-drink levels of caffeine, it has slightly more caffeine per ounce than Coke Blak, which had coffee bean extract added to regular Coke (and is no longer made). At 48 mg per 12 ounce can, you might actually notice a buzz.

We ate at a great pizza place called the Mellow Mushroom. I had a pizza called “The Mighty Meaty,” which has pepperoni, Italian sausage, ground beef, ham, and bacon. I was very happy with the pie, though I’m not much of a pizza snob (unlike people from New York… stuck up pricks and their cardboard garbage circles).

The final thing I initially noticed was on the first night I walked my dog. The cicadas are insane here. I’m used to crickets from living in the Midwest, but this is just nuts. 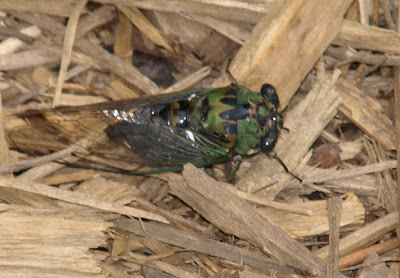