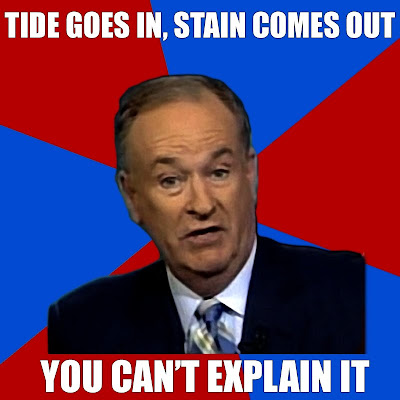 Not that long ago, I heard about Bill O’Reilly’s comments when speaking to an atheist regarding the tides. I also had the displeasure of bothering to sit through his rebuttal, where he then asks “who put the moon there?”

I was reminded of something I found out in high school while in a statistics class. We were asked to write a short survey and to analyze the results. I chose to ask people for basic demographic criteria like age and gender, and I chose to include religious affiliation. The real meat of the survey, however, was asking basic scientific questions. Two I remember in particular (because I wrote about them extensively due to their implications) were “Do men have more ribs, do women have more ribs, or do men and women have the same number of ribs?” and “What causes wind?”

The first is simple, it’s one of three choices. The second required a far more nuanced answer, though it wasn’t a test to find who had the right answer. The first does have a simple right or wrong dimension to it.

Among the religious, very few (including a medical doctor) got the first question correct. The religious did much better on the other question, though they still trailed non-believers and the two Buddhists I talked to.

The most interesting thing about the first question was that religious people were more apt to guess that women had more ribs than men, often owing to the story of the creation of woman in the second Genesis story. Plenty of atheists, non-believers, agnostics, and non-Christians in general got this wrong, too, but only about half (compared to something like 80% of Christians). What’s stranger is that non-Christians who got it wrong tended to say women had less ribs, many vocally reasoning that women might need one less rib in order to accommodate a baby.

This says something very meaningful: when confronted with an unknown, believers and non-believers approach things from very different perspectives. This seems obvious, but I think it bears an explicit mention.

We’ve come to wind, and what causes it. I actually had a small number (single digits, out of 50 people) literally respond “God.” I had a fair number of people say it’s caused by the ocean (some wind is indeed caused by the ocean) or large bodies of water (I lived in Indiana and was talking to people from Indiana, so we were familiar with lake-effect weather patterns). Some people said something having to do with air pressure (which is more of a result of wind than an initial cause, though pressure systems do have an effect on wind). I had roughly the same number of people joke with me about beans causing them to break wind as I had answer “God.”

Only a handful of people really boiled it down (bad pun intended) and simplified it to: the sun/heat. When it comes down to it, the sun’s energy is the catalyst for all weather on our planet. The conditions on a planet further affect how this heat is translated into environmental phenomena. Having a thick atmosphere will trap heat, like on Venus. Having a thin or escaping atmosphere causes cooler temperatures, like on Mars, while having no atmosphere causes extremely hot days and extremely cold nights (like on our moon).

A fair number of the non-Christians got some sort of answer that resembled “heat” or “the sun.” Many were able to explain the process of uneven heating of the planet’s surface, the role of ocean currents, and other general mechanics at work behind wind. The Christians (who were the overwhelming bulk of my 50 people queried, something like 38 or 39 were Christian of some kind) didn’t do so well. Some got it, most didn’t, and two told me about how their house was destroyed by a tornado, though they still didn’t understand what causes wind.

I have one question left: is this ignorance caused by religion, or is religion merely caused by this inherent ignorance?

What’s more, why do stupid people think that their ignorance is evidence for the existence of God?