Spitballing on the Religion of Atheism

Suppose I were applying for tax-exempt status as a religion, and I designated my religion as “Atheism.” Would it go through?

As it turns out, it might, but it depends on a few factors. First, I could not claim ownership of the organization’s assets, nor could I receive an “excess benefit transaction.” I’m cool with this, since I don’t have the desire or need for a large amount of money. I could live very comfortably on $25k a year. I would probably buy a guitar in a crazy fit of consumer excess, then switch to single-ply toilet paper out of guilt.

Now, I could claim I was a charity, or I could erect a monument to a famous atheist (George Carlin, perhaps), and the maintenance and donations for its upkeep would be a tax-free venture. I could form an educational organization, or create a group that defends human and civil rights.

Ultimately, though, I want to claim exemption under the “advancement of religion” clause. If the religious are going to say Atheism is a religion, it’s about time Atheism got recognized and honored with all the benefits. Ultimately, I think this might be the way to go.

Here’s the thing: the system is set up to favor close-knit, organized sub-communities. Atheism has failed, not because they are unherdable cats, but because atheists have not yet asserted their rightful place in accepted society.

For the die-hard “Atheism is not a religion” folks, I personally soothe it all away by reminding myself, “Well, it is a religious affiliation, in the context of a survey…”

What would Atheism, the religion, look like? Here’s where I had to put my religion hat on. How would a religion handle the tenants of Atheism as we know them… hmm…

So, I climbed this mountain and while I was up there, I saw a bright light and I was struck with a vision (and let me be clear, it was definitely not a seizure… no revoking my driver’s license). I received a message from Nogod. Unfortunately, there were no stone tablets, and I don’t have any evidence that it happened… but honestly, why would I lie?

My memory is a little hazy (I was tired from the climb, and I haven’t been sleeping much lately). I remember the gist of it, however. Nogod says to me, “Bret, I don’t have any commandments for you, but I have some advice.

“First, there are no gods but those you imagine. They are only real in the sense that belief in them may affect how you act in reality.

“Second, if you must believe in gods, do not put gods ahead of other people.

“Third, though you should value other people before gods, you should not turn people into gods.

“Fourth, use of violence in word or action should be restrained and used only against someone who is being violent or a total douche. When in doubt, wait and see.

“Fifth, don’t work too hard, but don’t be a mooch. Stress kills you, and laziness kills those around you.

“Sixth, repay the kindness of others at their convenience, not yours.

“Seventh, be honest. If you must lie, do so by omission and only to be polite.

“Eighth, respect your neighbor more than yourself.

“Ninth, respect the possessions of others more than you would your own.

“Tenth, covet anything or anyone you want, but ‘no’ means ‘no,’ regardless of what she’s wearing.”

So we discuss it some more, and I tell Nogod that I have some ideas we should add, and Nogod tells me it’s not really up for debate. I still think there should be a rule about not touching little kids, and Nogod is like, “If there’s no grass on the field, flip ’em over and play in the mud.” I throw up a little in my mouth, swallow it, and change the subject.

But it begs the question, does Atheism have some sort of hierarchy? I don’t want there to be. Atheism shouldn’t be about leadership. This ultimately leads me to: what is the relationship of the Atheist to Atheism?

I kind of think of fellow atheists as cousins. I see them as equals, though I rarely see them. We have our own little familiar language and inside jokes, and it’s legal for us to get married in most states. Cousin has that sort of religious pseudo-family thing going for it, without being too creepy. Plus you can spice it up by abbreviating it, “Cuz.”

While we’re talking superficial things such as titles, why not discuss clothing. Hmm… clothing restrictions… that are atheist in “spirit”…

Only one clothing restriction comes to mind: don’t wear a uniform. This shouldn’t be tough, because most atheists are rather affluent, so they don’t wear uniforms, they just conform to “dress codes.” Atheism isn’t even officially a religion, and already it’s got loopholes.

Maybe the rule should be, follow the rules, but work to change the rules, that way the working poor are not excluded. So, why shouldn’t we have uniforms?

Well, uniforms just seem vaguely cult-like. I also find that people in uniform are often on the wrong side of history. You don’t see a lot of old news clips where men in uniform were making the world a better, more peaceful place. They’re usually marching with rifles, pointing fire hoses at innocent people, or hitting homeruns in the all-white league.

Honestly, I can’t think of any historical figure who changed the world for the better while wearing a uniform. Uniforms are uncomfortable and the sign of being a weak subordinate.

Some people try to claim kids will learn better if they wear uniforms, or that workers look sharp in a uniform. I firmly disagree on the latter, and I never shopped at a place because I knew the employees all looked alike, from head to two. As for the argument on school uniforms… let me put it this way: Nogod is a big fan of school uniforms: 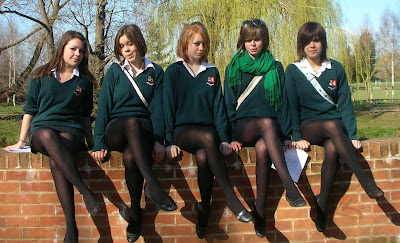 Why America thinks kids learn better when the girls are wearing the most popular fetish outfit is beyond me.

I think this is pretty good progress for one evening. I’m sure a week of letting it all simmer will yield some more.