Why Religious People Do What They Do

Years of talking to so many different kinds of people over the years has taught me something simple: people do things for the same reason, no matter what their background, personal affiliations, or personal choices. 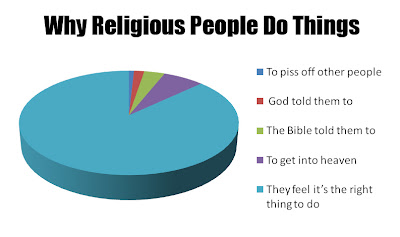 The only thing open for debate is what “right” is.

Sometimes, what we choose to do is “right” at the moment we make the choice, but we regret it later. Hopefully, we learn from that and we don’t repeat that mistake. Often, we make the same mistake over and over. But the fact remains, we either do it because we believe it’s right, because it feels right… or because we want it right now.

Even with all the Bible quoting, the majority of religious people do what they do regardless of what the Bible says. You find in the Bible what you are looking for, so if you go in looking to hate a particular group, you’ll either find that exact group or some analogous one. If you go in looking for reasons to love others, even when they hurt us, you won’t have much trouble finding that, either.

People don’t read the Bible to learn what it says about how to live, they learn how to live with what the Bible says. The decisions someone makes are weighed in a much more complex manner than simply, “What would Jesus do?” There are circumstances, and sometimes people make decisions you wouldn’t expect, even decisions they themselves wouldn’t expect.

Everyone is a moral person before the shit hits the fan. All the religion, ethics, morality, politics, and introspection in the world is insufficient for preparing anyone for being able to predict how they will act in many situations, particularly in the most dire or extreme circumstances.

The choices anyone makes are bound to haunt a person. Maybe this is why forgiveness and atonement rituals are so common in religions, to help people relieve themselves of crushing guilt and embarrassment, from life’s little foibles to deadly errors.

There is no religious person who only acts according to their religion because there is no perfect follower. Maybe this bothers some religious people, but I doubt it. Most believers don’t think of themselves as perfect, but as flawed people little different from others. And it should be easy for most non-believers to see, because we can spot religious hypocrisy like sharks can detect a drop of blood in the water from miles away.

I say this, then, not for the benefit of religious people. I doubt I’ve said anything they haven’t known already. Rather, I say this to atheists who may find it useful to keep this in mind when making broad, sweeping generalizations that don’t apply – or help.

Religious people have done some amazing things that had nothing to do with, or even went against, their religion. As we move into the future, it’s inevitable that some believers will continue to help in the effort for progress, so there’s no sense in alienating any religious allies in the context of larger issues.

There are theists on board with many important issues for atheists. Gay rights, racial equality, economic opportunity, access to healthcare, closing the gender gap, even fighting religious extremism.

It’s inevitable that atheists will say things that ruffle the feathers of theists, because atheists are rejecting and often ridiculing that which is seen as sacred by theists. But, as a minority group, non-believers must learn to work with believers, because we cannot accomplish anything alone. Thankfully, we don’t have to.