There is a sub-culture of ignorance in America. Throughout the right wing, words like "elitist," "intellectual," "professor [unless followed by 'of Economics']," etc. mean something negative. This is sad for the Republican party. The only reason to hold such negative views towards those with the most knowledge in their field is because their views disagree with your own. When the experts disagree with you, maybe it's because you don't know what you're talking about.

The general attitude among the right wing has been to create an appearance that these somehow corrupt thinkers are ruining the country. Nevermind the eight years of no-holds-barred Republican capitalism, in which industries did as they pleased. How did that work out for us? We're in the worst economic situation since the Great Depression. We are a weaker nation in both health and international respect. Our children are scoring lower than most developed countries, as well as some developing ones.

The best part of all of this is that Republicans refuse to increase funding for schools. I would argue this is to help increase the number of Republicans, since it's harder to convince intelligent people of their views. All it would take is a lesson in history for Republicanism to be seen as obsolete.

The greatest claim of the Republican ideology is that of decreased government intervention. This is a wonderful idea, especially as it pertains to daily life for the individual citizen. However, Republicans want to butt government into many individual decisions: from who you love and marry to when your life begins and ends. Republicans repeatedly support measures that take control out of our control and puts it into the hands of Jesus Christ, the Holy Ghost, and the Supreme Douchebag Himself. So why do Republicans claim to support "small government?"

Republicans aren't lying when they say they support smaller government, they just don't express where the government will be getting smaller. Republicans always reduce help for the citizens, both in times of need (natural disasters, welfare, healthcare) and when dealing with companies (in the form of decreased regulation). You know all those food recalls? Classic Republican deregulation.

Right wingers are full of shit when it comes to being fiscally conservative; only a Democrat has ever balanced the budget in my lifetime. Republicans love to say Democrats spend too much money, yet every Republican president since Reagan has made it their sworn duty to put this country in debt beyond the point of ever being able to repay it. If you think my generation, the children of Gen X, are ever going to get off our asses and pay that... well you must be as high as we are.

Republicans fear those who might challenge our most basic, cherished, time-honored prejudices.
Republicans, please: stop being ignorant. I know you guys aren't stupid, and there's a big difference between being ignorant and being stupid: ignorance is temporary, but stupid is forever.

A visual representation of Bush's life: 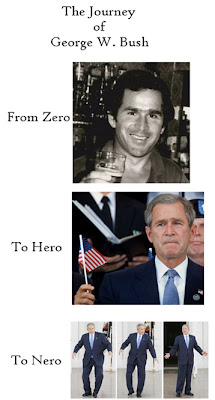