Politics often makes for strange bedfellows. What is stranger still is the cognitive dissonance that occurs when ideas themselves are bedfellows in the mind of the same individual. There are “pro-life” Republicans who support capital punishment. There are “pro-choice” Democrats who want to tell people what they can or cannot eat, drink, smoke, drive, say…

Basically, you cannot count on modern American politics to be particularly principled. Instead, the two major parties are a hodge-podge patchwork system of individual policies with no discernible ideology underlying the whole platform. This isn’t necessarily a bad thing, as I myself am quite against the idea of principles without exceptions.

However, sometimes there are just incompatible ideologies that are supposedly pillars of a party, though they blatantly contradict each other. This is the case with Republican economic policy.

Every conservative or Republican or libertarian (all of which are virtually the same in my book) I have talked to about politics have expressed a belief that one’s economic station in life is self-determined. According to right-wingers, poor people deserve to be poor and rich people deserve to be rich.

Of course, there are exceptions. Poor Republicans don’t see themselves as poor because of their own failures. They tend to blame the government (especially Democrats). Meanwhile, if you talk to the right about rich liberals, the Kennedy family for example, there is an undeniable disdain for the generational transfer of wealth and power.

So clearly it is possible for right-wingers to understand that the system is not truly one where hard work and merit win out over privilege and circumstance.

Now please realize I’m not saying all Republicans are racist. However, every poor Republican I have ever met (and I grew up in Indiana, so I knew a lot of poor Republicans) is unbelievably racist. We’re talking going-out-of-their-way racist. I knew people who wished every black person would be shipped back to Africa… except Reggie Miller during his prime. There’s that disconnect again.

A lot of these poor Republicans think black people are just sitting around on city porches drunk and smoking crack on government welfare, even though poor black people tend to be like poor white people. Both are what I would call “the working poor,” which is to say they are employed (maybe even working multiple jobs), but they still do not earn enough money to live unassisted.

There are people right now who work 80 hours a week and live paycheck to paycheck. That isn’t right. Even if all they’re doing is scrubbing toilets, they deserve better compensation. I don’t care what your ideology is or what color you are, you shouldn’t have to work twice as hard just to eke by.

Rich Republicans aren’t much better. Most middle to upper-middle class right wingers I have known are not racist, they’re just classist. They see the poor as lazy, even though the poor work harder than these privileged “I’ll just take a day off to be go golfing” nitwits.

Most are not even particularly bright, as they like to imagine they are. The middle- and upper-class Republicans I know think that because they went to college, they’re somehow better than other people. Never mind the fact that they only got in because their daddy went there and paid for it, or that they majored in drinking with a minor in date rape.

It’s funny, really, because the poor Republicans complain about how they didn’t get into college because of all the negroes (the polite word for “those people”), when really it’s the rich white kids who took their spot. Rich kids get sent to private high schools, have parents who make donations to ensure acceptance, and ultimately drive up the price of tuition.

What poor Republicans are really upset about is that they didn’t get a hand-out, like a scholarship they heard about that went to a handful of black kids, and therefore the system is racist because it rewards people for being black. Meanwhile, it’s the rich that have created the current inflation in education costs at the university level by pushing every middle class child into believing they must go to college, even if they have to take out six-figure loans they are only able to get because of their parents’ credit rating.

They never mention the lack of a hand-out at birth when they were born into an under-privileged family… after all, they love their family. You can’t blame them for being poor… you can only blame people you don’t love for being poor.

And yet, in a way, economics is very Darwinian in our world, though not in the way the right-wing wiches. We do not live in an economic environment where the fittest survive and the weak die off. Instead, we live in a system where wealth is inherited like good genes, passing success through family lineage.

This country was founded on the idea that we should not be ruled by a nobility that consolidates power in the hands of their small, inbred families. Strangely, the inbred poor are now propping up the new nobility.

If you like the idea of spoiled rich kids running the world, I have bad news… this is what they think of the rest of us, the unclean masses: 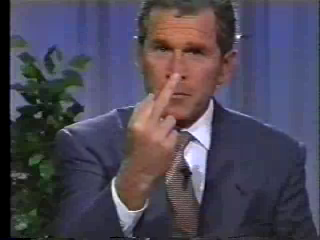