I believe religion exists because it performs a needed role. I’m not a strict functionalist, but I do think that things are the way they are today for a reason, and that reason is largely because what survives has found a way to help us adapt. Religion helped mankind adapt to its intelligence. One must understand what early religions were – and were not – in order for this to truly make much sense.

I can’t pretend to know what the first religion was, or what the first problems that arose were which necessitated the creation of a religion, but I can make some educated guesses which you can mull over and consider for yourself.

Before I talk about what early religions were probably like, I want to point out some of the things primitive religions were not like. Morality played little or no role in even early religions whose knowledge we have today. Justice was universally separate from religion until the rise of Judaism. There was probably always a close relationship between the leadership (who was usually military) and the clergy, but it was not until the legalistic approach of Hebrew theology did a god lay out laws like a governing entity.

It is an inverse from the more common early occurrence of god-kings, men claiming to be divine (or born of the divine) who held power with a supernatural mandate. So, while religion was not the source of ethics for early people, it did quite often prop up the elite to the level of authority needed in order to dictate law. In this respect, very little about religion has changed in thousands of years.

I have often heard people make the mistake of saying, “Science is a religion.” It’s completely backwards, you see, because religion is a science (and arguably the first one at that, unless one were to make a hard case for astronomy/astrology as a distinct and more precisely scientific pursuit, one which was no less mythological in nature).

Science is a broad term, like universe, which encapsulates. Science is observation, codification, and explanation. Science is the pursuit for knowledge of the order of things. Religion is essentially the science of the supernatural, though for nearly everyone who is religious, it is more of a narrow course on select ancient Hebrew and Greek literature.

The need for religion will never disappear, even if religion were to vanish suddenly. The questions people ask which religion claims to answer do not go away once the wild conjecture is silenced.

And yet, the “tough” questions are not difficult for any level-headed adult to grasp (not to mention most high-functioning kids).

Your parents fucked. Next.

Well, some white people came over from Europe and beat the native tribes off their land. If you’re talking about earlier… then chemical reactions occurred on the Earth which formed self-replicating proteins that mutated over billions of years into cells, plants, fish, amphibians, reptiles, birds, mammals, apes, and us, and we’re the first of all living things that we know of to figure that out.

“What is my purpose?”

Only you can answer that question, and to let someone else answer it for you is to spit in the face of freedom.

“What happens after we die?”

I imagine it’s like before I was born, in that only I and those who love me will really notice a difference.

“Why do bad things happen to good people?”

Because good people are doormats.

“Why do good things happen to bad people?”

The world has a soft spot for assholes. Women want to fuck them, men want to be them, and this is probably why we grow to hate them, and it may even be what makes them assholes in the first place.

“Why does the sun darken skin but lighten hair?”

I don’t know, google that shit. That’s trivia, not philosophy. Jesus, caller, why am I paying you 40 bucks a call when you ask such stupid questions? Stick to the script.

“Why is there something rather than nothing?”

That’s a good question, one which couldn’t even be asked if nothing had happened. Why did something happen? Clearly it’s because of a god hanging out over some deep water spoke the universe into existence with a garden, two people, a forbidden tree and a talking snake. That’s obviously the logical conclusion, because people thousands of years ago who thought the sky was a dome which held back water said so.

The truth is, you don’t need all the answers. It’s good to know when you don’t know something, because if it’s something important to you, you can then go about finding the answer (or perhaps come to the conclusion that the answer cannot be found given our present data-gathering methods).

Usually, when I talk to people who are religious and are open to asking me explicit questions, I find that the questions they ask often reflect that person and their need for religion. One of the worst ones I hear from time to time is, “What is the point of living if there is no God, if this is all there is, and nothing really matters?” 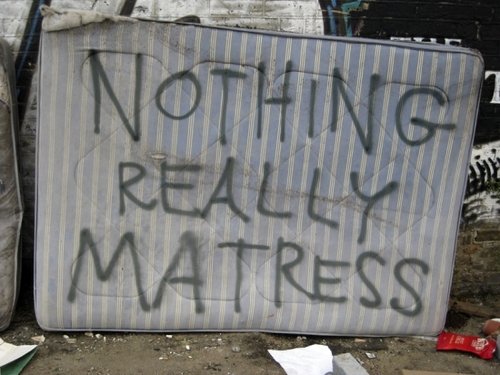 What a revealing question. This person has literally staked their very reason for living on religion, which is just so sad. The “if this is all there is” clause is also quite meaningful, as it implies their situation here on Earth is burdensome. I sometimes wonder if more people would be less willing to put up with being taken advantage of as poor if they weren’t Christian. I think Christianity and its promise of a better life after this one has effectively tranquilized the masses, especially among what I affectionately call “trailer park conservatives.”

But the most disturbing comment is when someone implies that without religion, “nothing really matters.” Really? Without your religion, you wouldn’t love your kids? You wouldn’t enjoy cookies as much, and flowers would stop blooming? Would jokes no longer make you laugh? I want to know, what no longer matters if you cease believing in gods?

Sure, you could be an asshole and get your way and push people around (not that religious people aren’t doing that already), but then people will hate you. And they won’t have religion to scapegoat as why you’re being a prick, so the only target left will be you.

In a way, religion still functions as a societal cane. It allows the weak something to lean on, and the malicious something to swing at others. I wish we lived in a world where we could lean on each other, instead of devising ways of hobbling alone.