What the Casey Anthony Verdict’s Reaction Says About America

I am going to make a lot of generalizations in this post, and I make them with the assumption that the reader acknowledges that I am not implying absolutes, only trends.

I get the impression that America is pissed off at Casey Anthony. 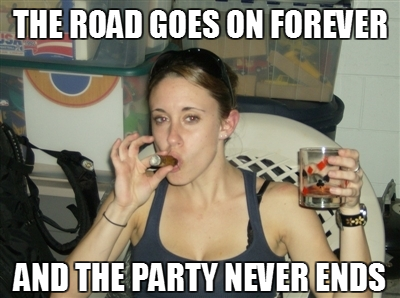 But frankly, I’m not interested in discussing the verdict itself or even how I feel about it. If you’re curious, I don’t think she killed her daughter, though I see how it’s certainly a possibility, and I’m a little upset that she wasn’t found guilty of hiding and disposing of a body (as I feel the evidence is overwhelming that she did at least this much).

Instead of that, I’m more interested in discussing what this means about America. After the Simpson trial in the 90’s, it was an interesting view into the American psyche. You had some black people rejoicing, some white people nodding in approval, and outraged people of every sort. There were people saying he got off for being black, for being famous, for being rich, because the police department was racist… there was so much involved.

Of course, these amusing political caricatures don’t take the trial itself into the account, let alone the events leading up to it. Most of the people I know who were old enough to remember OJ speeding away in the white Bronco just assumed from that moment he was guilty. Innocent men don’t run, after all. Even those who praise the verdict often admit he probably killed his wife and Ron Goldman.

In the end, however, I found the OJ trial too divisive, while this recent Anthony trial has had an essentially unifying effect on the nation.

And what an enemy to rally against: a young, white party-girl. It’s like the nation was able to put Paris Hilton or Britney Spears on trial.

I have looked and I have found some, but I see very little support for Casey Anthony. Primarily, I see any support for the verdict in the form of basically defending the system itself or attempting to delve into the ramifications of “reasonable doubt,” but not a lot of people claiming Casey Anthony was innocent. In fact, many of these articles which don’t outright condemn the verdict make the point that there is a difference between “not guilty” and “innocent,” a not-so-subtle swipe at Anthony.

I haven’t seen young people, women, or white people speaking out in support of Casey Anthony. I don’t see liberal black people feeling shamed into defending her because she’s white. I don’t see really anyone whose opinion carries any weight even support Casey Anthony, and only a very sparse and halfhearted defense mounted by a few cynics and skeptics in the blogosphere.

It’s interesting that in these polarizing times, we can still pretty much all come together to burn a witch.